Took a pause from Wurttembergers and recently finished my first couple regiments of Prussian Cuirassiers - some of my favorite uniforms of the napoleonic period! I think their white collets with no cuirass gives them a striking and unique visual, so choosing to go with the collets and not their campaign blue litewkas was a no brainer.

The problem was actually coming up with adequate models for this prussian cavalry, as there are no plastic kits in 1/72 for late Prussian Cuirassiers. Waterloo 1815 has a set of metal cuirassiers, but they were not a good solution for me. For one, they're metal, and therefore considerably more expensive than plastics. Secondly, they come 6 in a set, with 3 of the horsemen being command models - and officer, a trumpeter, and a color bearer. Thus, to come up with multiple units of my 18-model cavalry regiments, I'd need to buy a lot of sets, and end up with a large number of the spare command models, for which I'd have no use whatsoever. Lastly, the models from that set are not great enough sculpts as to tempt me to put some good money on them.

Thus, I looked for a solution with plastic kits, and it involved using HaT Russian Dragoons riders on HaT Russian Cuirassiers horses. The russian dragoon helmets from the HaT kit are sculpted with their early, bushy crests, which is perfect as it gives me enough material to work with, so I was able to trim them into the shape of prussian crests. The other conversion I did was to make their breeches go over their gaiters, which was pretty straighforward, since the detail delimitating their breeches, right under their knees, was pretty shallow and easy to scrap.

All in all, I think the end result turned out to be a very convincing Prussian Cuirassier Regiment, and because I like these heavies so much, I plan on doing 4 regiments in total. 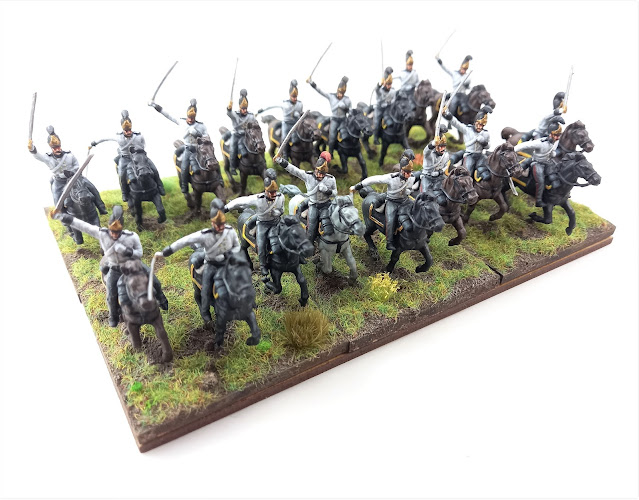 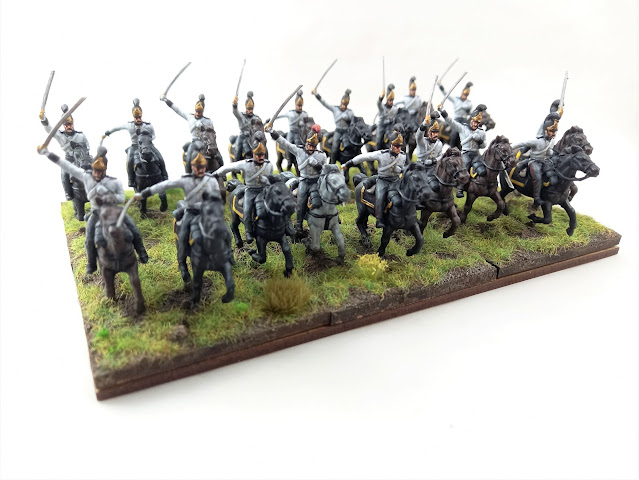 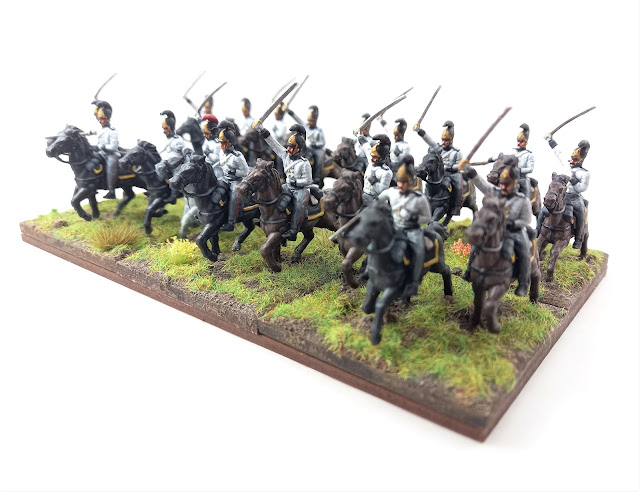 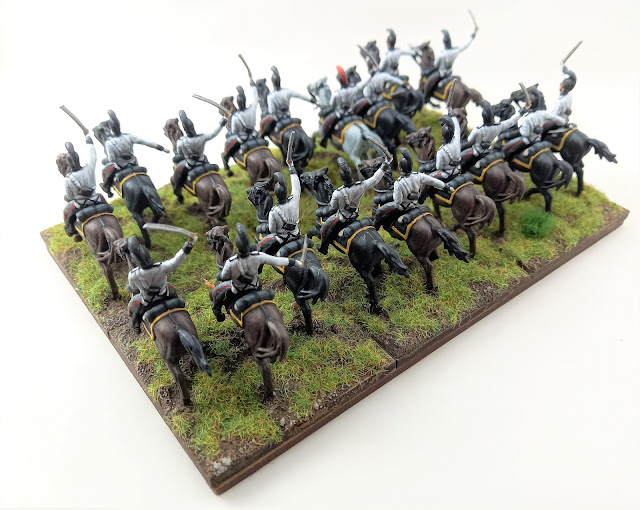 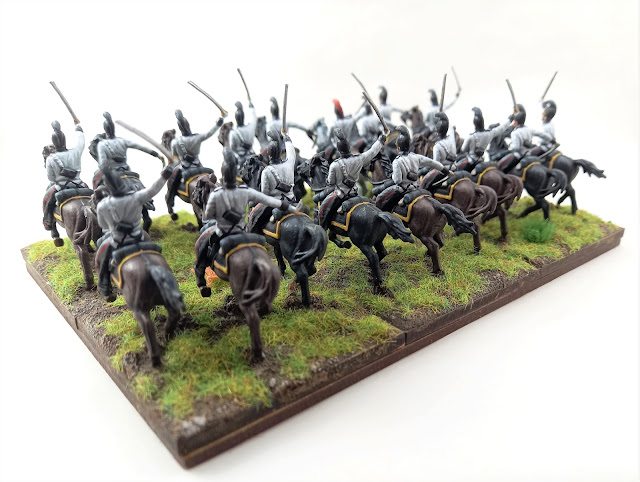 While painting my Wurttemberg infantry, I also made a command base for the infantry brigade, using some spare infantry models from the HaT kit, and a Baden general from Franznap. 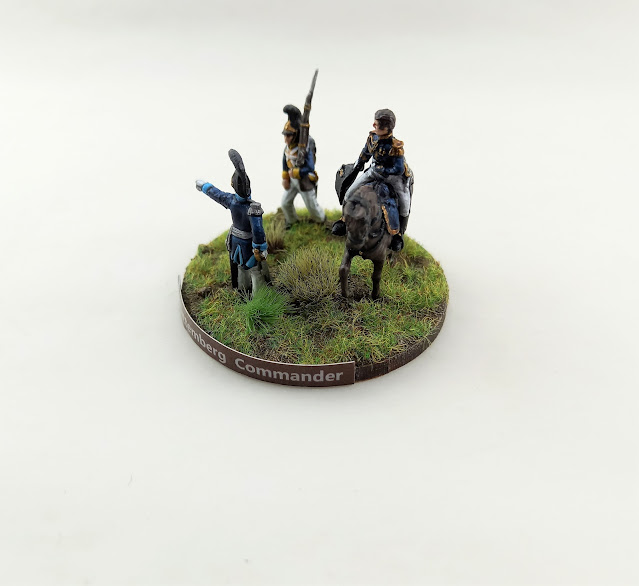 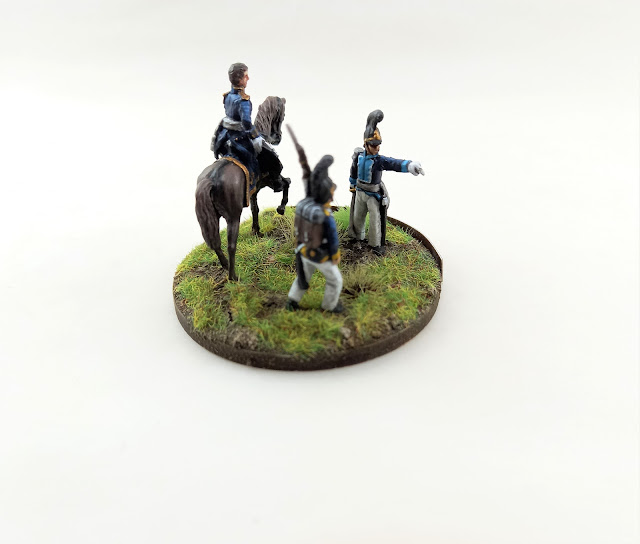 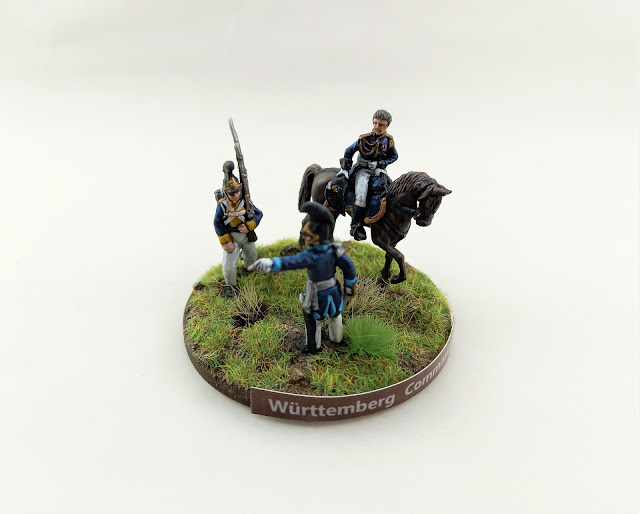 As I had 2 kits of Wurttemberg infantry, I had enough jaeger models to come up with a small formed unit, of 2 bases, and a good number of skirmishers - 12 bases, enough to represent 2 small units, as I usually go with 6 skirmish bases per unit. 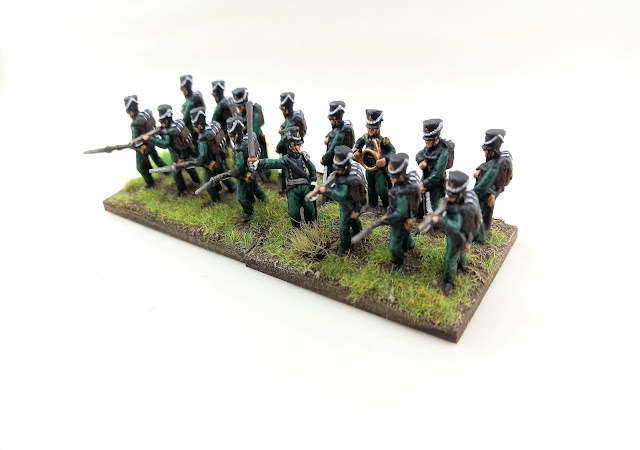 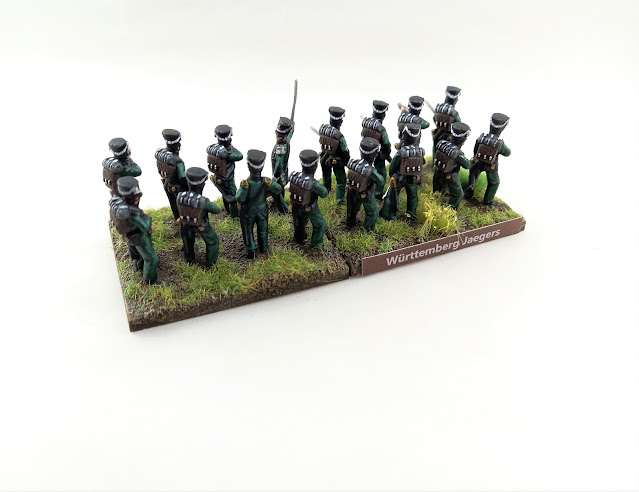 Here are the skirmishers: 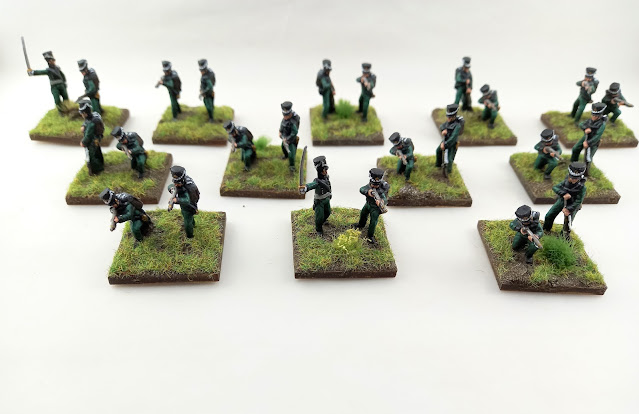 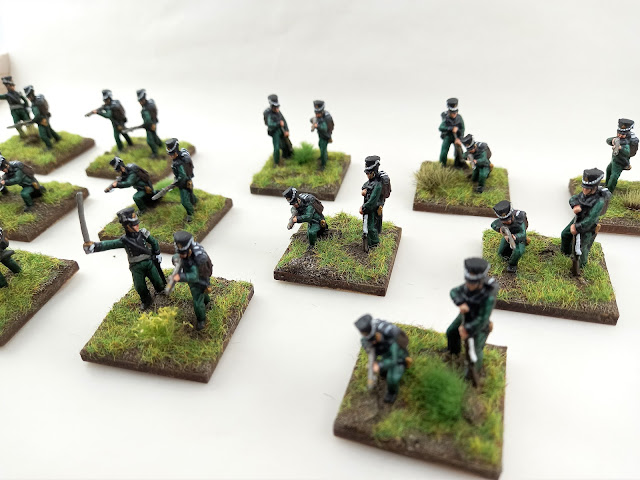 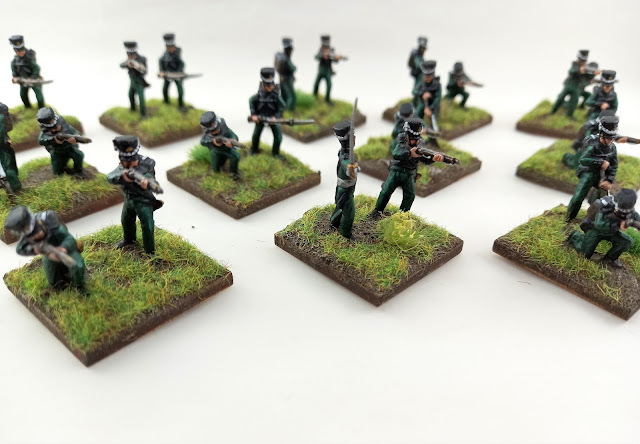 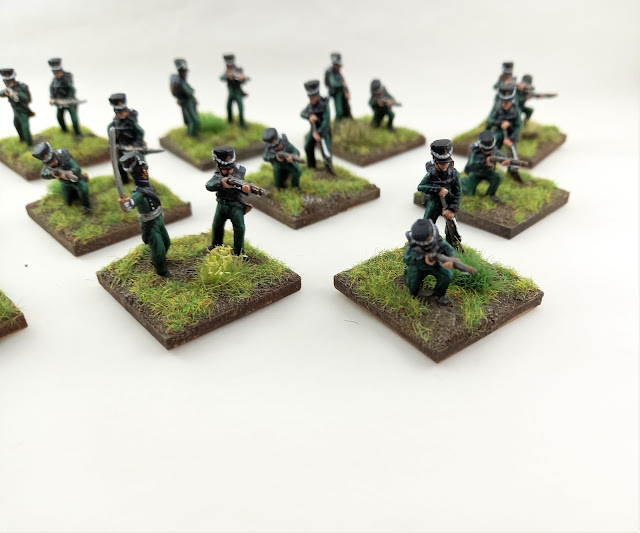 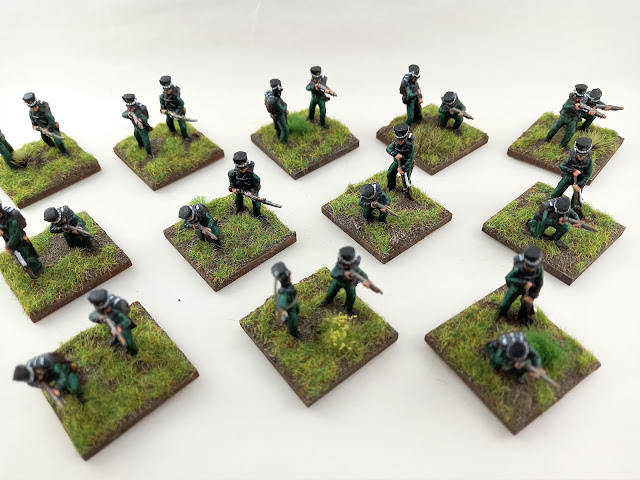 Now I'll be addressing the prussians again, and paint a couple of (converted) cuirassier regiments, and then back to the Wurttembergers, to give them some artillery and light cavalry.
Posted by Matgc at 10:00 AM 4 comments:

Here is the last battalion of line infantry for my Wurttembergers, the Prinz Friedrich Regiments, with their light blue facings. With these, I now have 4 battalions of line infantry, which together with some jaegers and artillery will form a pretty strong german brigade to assist my french marshals on their lunatic endeavors to rule continental Europe! 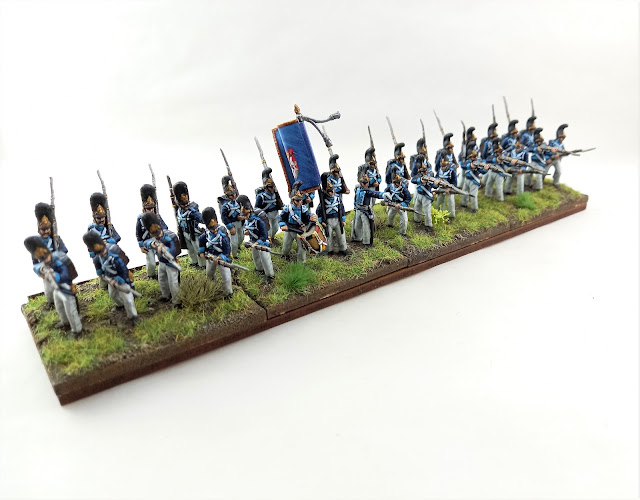 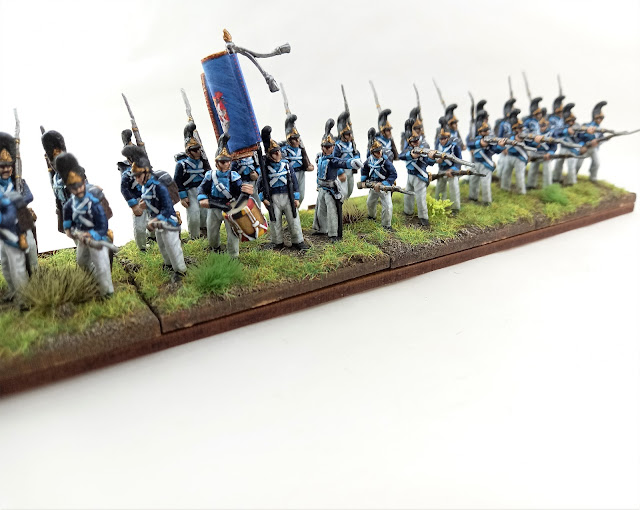 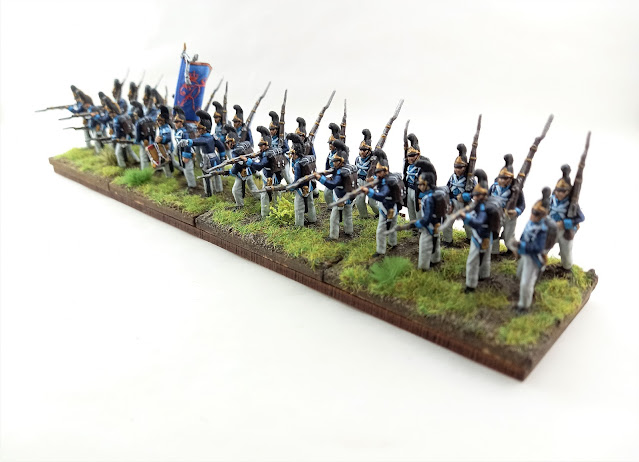 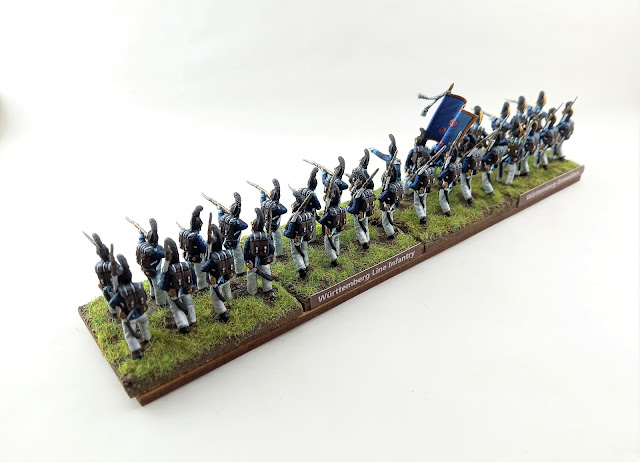 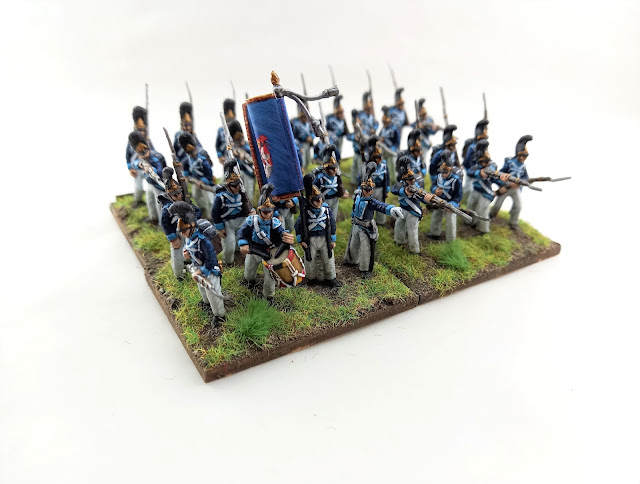 Next up are the Jaegers, then I'll need to work on some cavalry and artillery, and that'll be it for the Wurttembergers.
Posted by Matgc at 9:41 AM 1 comment: