One of the things I enjoy about wargaming is background. A game has to have a good story. At least for me. About a year ago, I came to know about the Galactic Knights line of miniatures through Desertscribe's great blog, the Super Galactic Dreadnought. The game carries on an old line of spaceship miniatures from the 80's, originally published under another ruleset, the Starfleet Wars.

Those minis slowly grew on me, as I followed Desertscribe's numerous posts about them, where his remarkable passion for these models was made quite evident.

What got me into that line is not only the appealing design of the models, but also the background story involving the game. It takes place in a fictional universe were humans (terrans) are in conflict with 4 major alien races: The Aquarians, The Carnivorans, The Avarians and The Entomalians (insectoids). It is truly a very original idea, isn't it?

From the moment I came to know the outlines of the story behind the game, I got very curious as to how each alien race would look like. Not long ago, I finally saw a picture of an avarian on the Super Galactic Dreadnought, but I was just recently able to check the rest of them through a link on another great blog about these minis, the Starfleet Wars.

The link redirects you to a store that sells sculptures of characters of each race. Here it is: link. 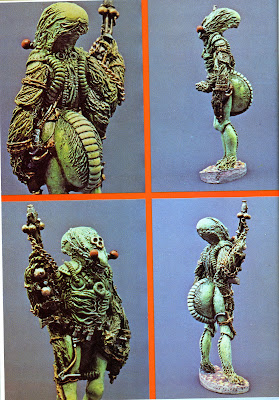 Desertscribe also has some of the best paint schemes around for these races. I'm going to copy the look of at least 2 of his fleets, since he gave me green light for that.

They are the Carnivorans and the Entomalians: 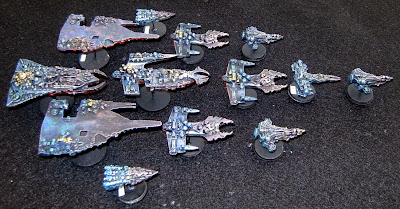 Monday Knight Productions is the store currently selling those models, as well as the Galactic Knights Rulebook and expansions, and they have recently announced that the huge and heavy Super Galactic Dreadnoughts of each race are going to be available also in resin, bringing their weight and costs down.

I just hope they keep the metal SGD's available, for those (like me) that prefer to pay a little more to have those behemoths in full heavy metal (!).

My first fleet of Galactic Knights is already purchased. When I return home from work travel I'll start working on them. Next in the wish list are the Carnivorans!