Last saturday I played Black Powder with my own minitatures for the first time. As currently my two available armies are french and british, this was an enactment of a clash during the Peninsular War, most certainly.

It was a 680 point game with the Black Powder rules, and I played with a friend that never had contact with that ruleset before. The system is very much "noob-friendly", and he was able to quickly grab the basic concepts of the rules while we were going.

I forgot to take pictures of the deployment, but from then on I took a whole lot of them. Here we see the first movement of troops in the field. 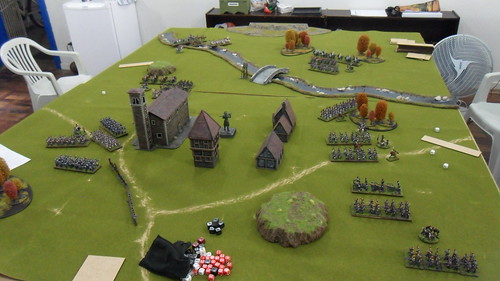 It was early in the morning when the opposed forces made contact. The british had seized the field and planned to entrench in the village beside the river. The french wanted to avoid a city fight, and doubled their march to meet their foes before that. By the time the armies deployed for battle, the small town was half way from each force.

The british left flank (third brigade) was ordered to cross the river (shallow waters) so to draw part of the french forces away, leaving the bulk of the british army to fight for control of the town.
The french third Brigade followed suit, and soon the battle was divided over the two river banks.  The British centre marched toward the Old Guard, which was then ordered to maneuver into the town, thus avoiding confronting alone the entire British 2º Brigade. 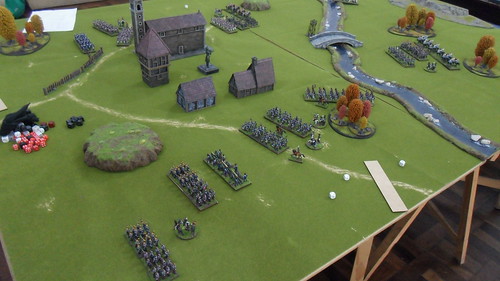 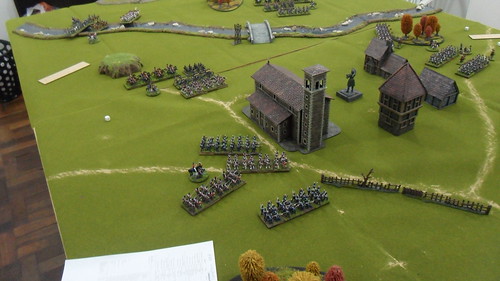 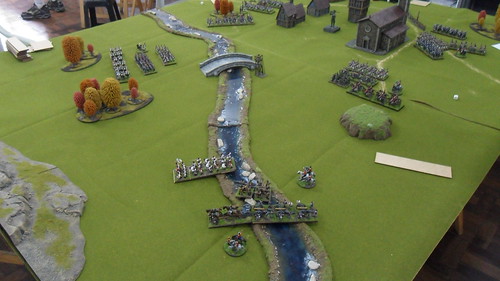 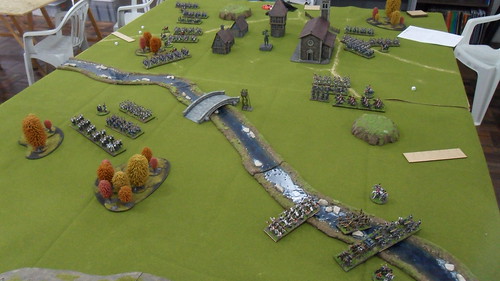 In the other side of the river, the french send the cavalry to flank the british on their left. The Spanish regiment prepares to form a line of fire to repel the french infantry. Meanwhile, the horse artillery maneuvers behind to find a good position to pound over the enemy. 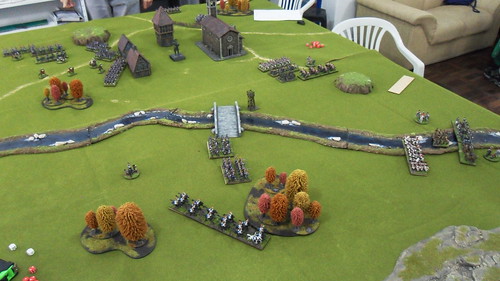 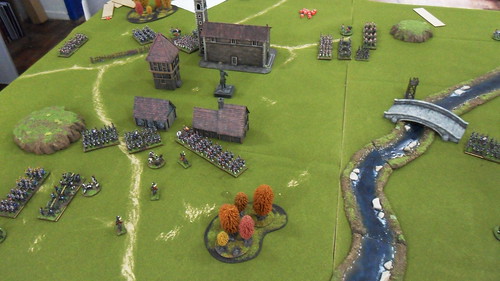 In the outskirts of the small town, the armies close in. 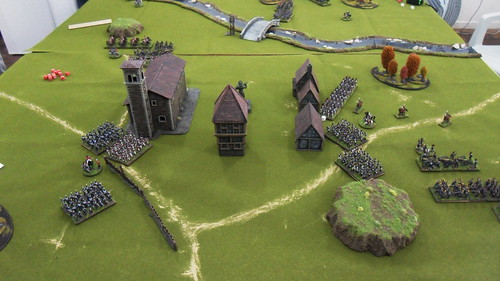 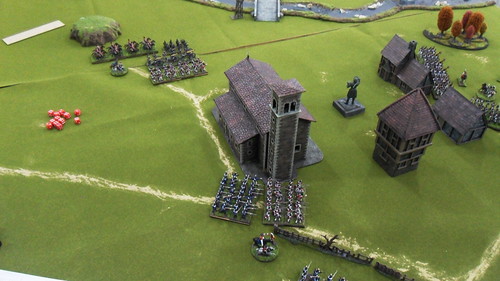 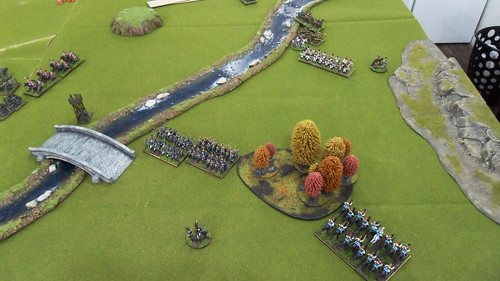 The british Commanders face some difficulty in having the portuguese regiments march forward. The french are quicker to deploy in firing lines on the left flank. At the same time, the Old Guard rush into the city centre, trying not to get caught on march column by the British 2º Brigade. 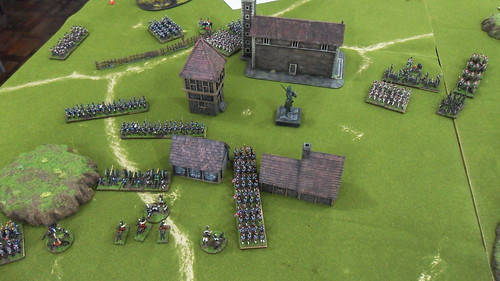 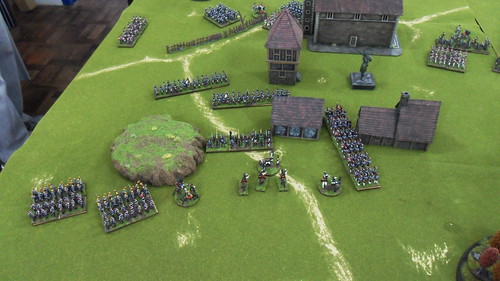 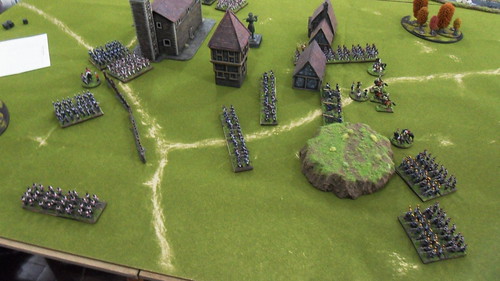 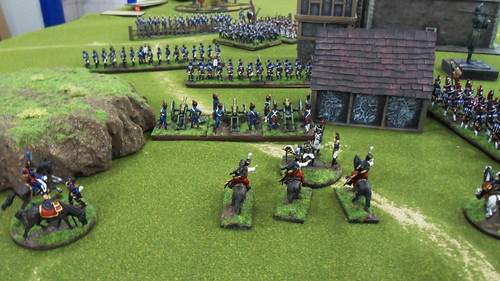 French Fusiliers prepare to open fire on advancing columns of portuguese and british. 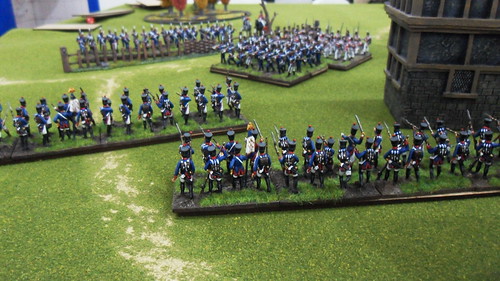 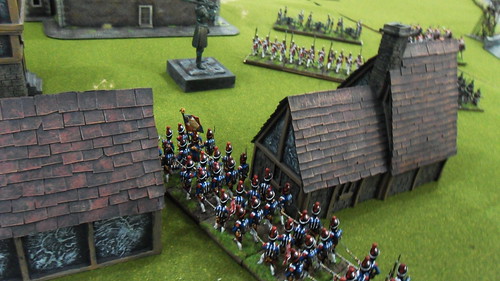 The Imperial Guard manages to reform into attack column after reaching the main square. The british infantry is already in fire line, pivoting for a better position. The rifles are ordered to flank the guard through the right, while the dragoons attack on the left. 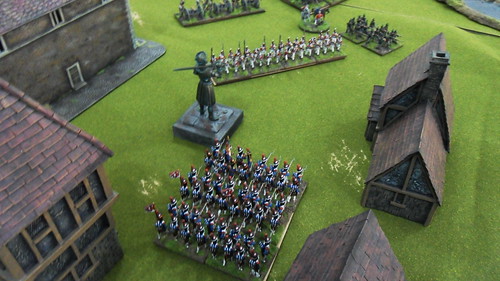 In the other bank, french regiments advance in attack column towards the spanish lines, which are backed by portuguese caçadores and british horse artillery. 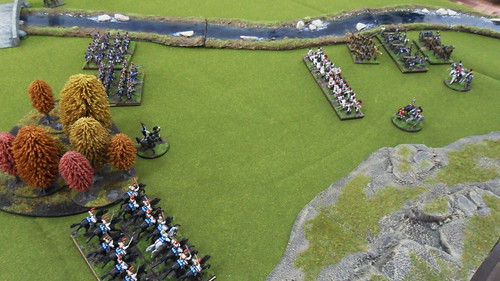 The fighting is about to start. Stay tunned for Part 2 of this Battle Report!