Lately, I've been playing with the idea of starting a new army, with my very own background, and a Scifi nazi army is what attracts me the most.

Few things scream "bad guys" more than a nazi army, right, and there's an abundance of great looking "nazish" models in the wargaming market that I've been wanting to collect but couldn't find use for.

So, I finally decided to gather them all into one army that I'll be able to play in Para Bellum, my work-in-progress 28mm ruleset.

The first models in this new army are the grenadiers from the Dust Tactics line. These are going to be power-armored elites in my Scifi nazis. I very much like the clean lines of their armor. Very simple and good looking. 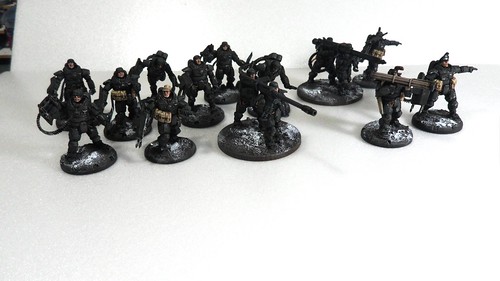 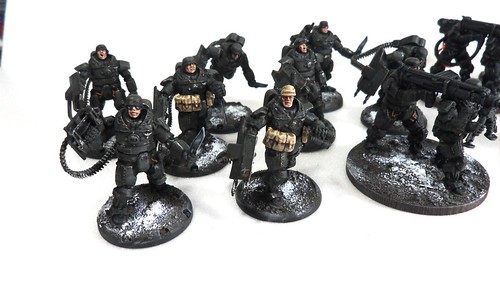 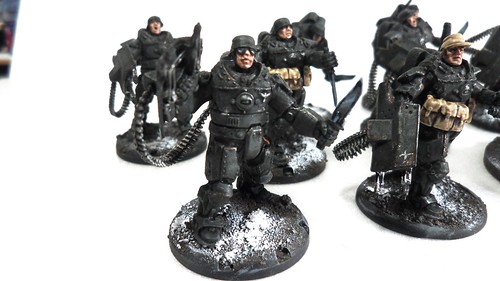 As of now, I have enough to come up with a 10-model unit, with 2 of them being a heavy weapon team, another being the unit leader (the guy with the hat on the pic below), and a couple spare guys. 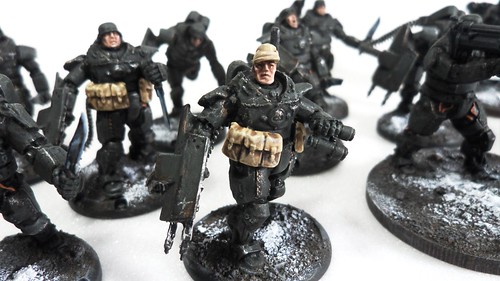 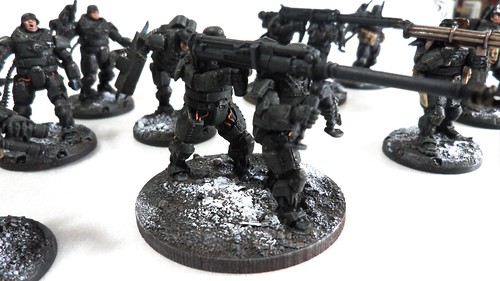 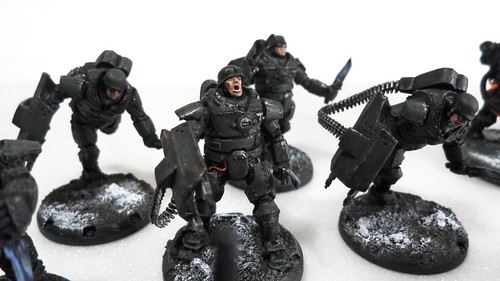 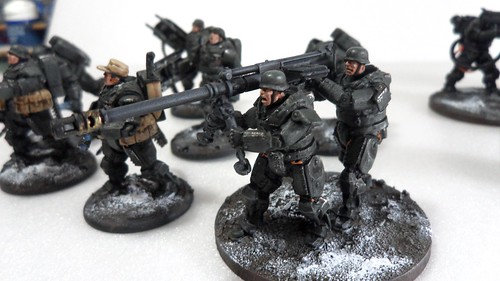 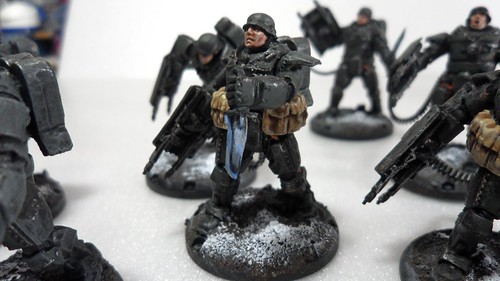 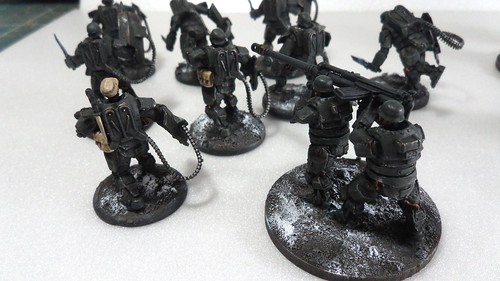 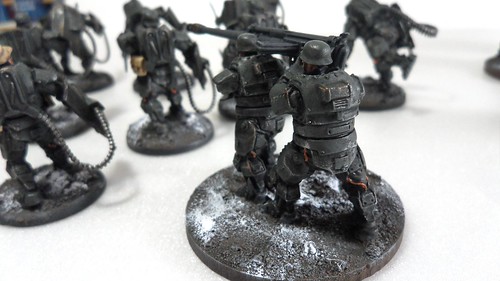 Below, we have this guy carrying a one-man heavy weapon with a too-long-and-full-of-consonants-name for me to remember right now, and a power-armored HQ. 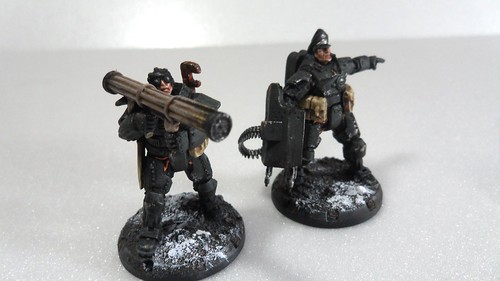 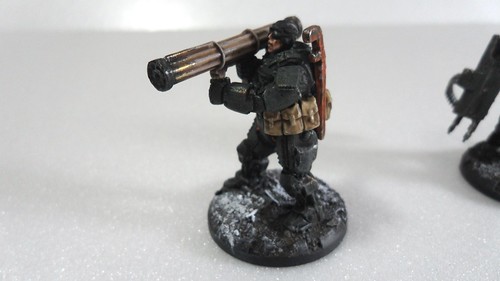 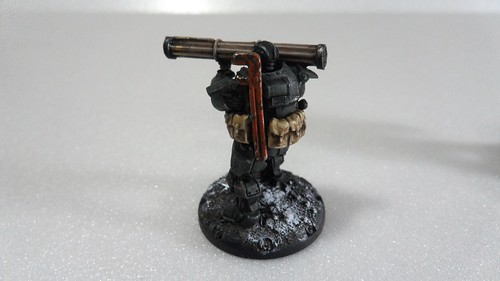 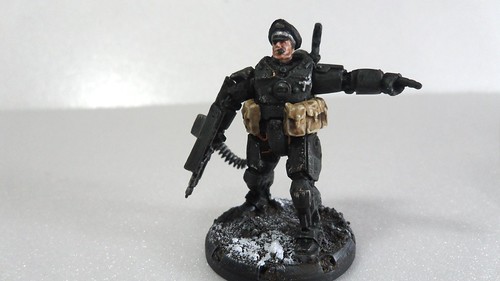 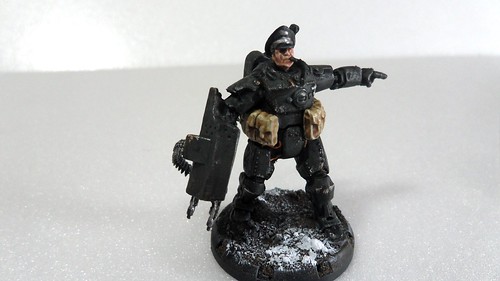 These guys below are Laser Grenadiers. They are going to be part of a distinct power-armored unit. Their heavy weapon is some sort of Heavy Laser Cannon. 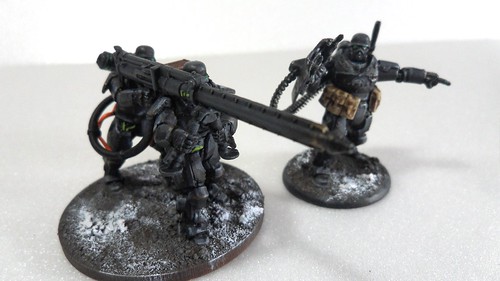 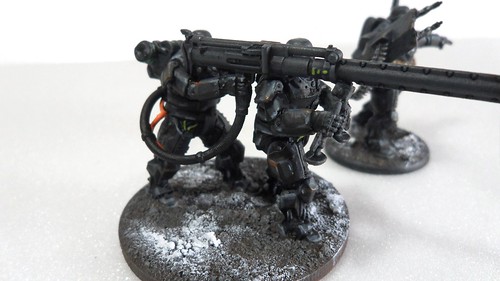 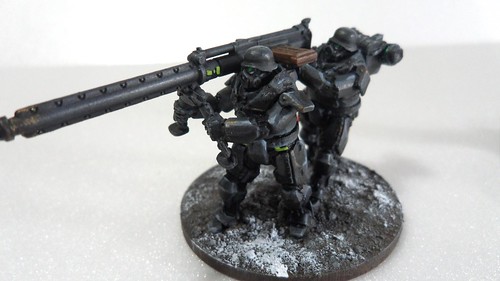 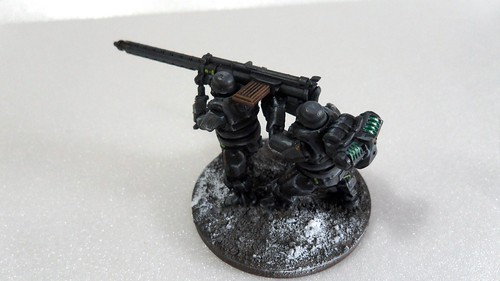 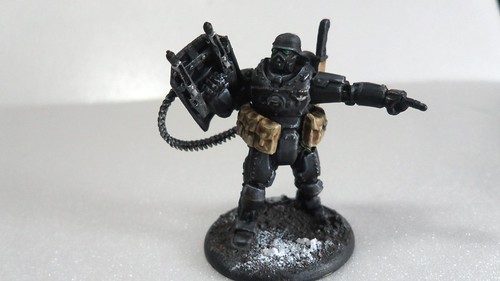 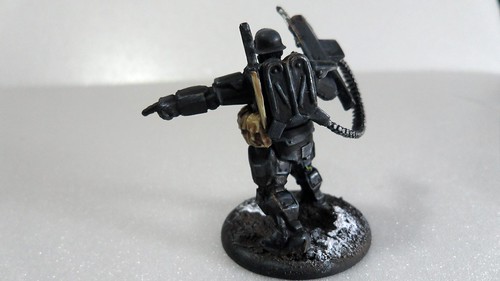 I haven't yet determined the exact fluff for this army. 2 options are being considered.

The other option is that WWII went down as we know it, with nazis being defeated and all that, and decades into the 21th century, WWIII (probably between USA and China) turned most of the world into a nuclear waste. Europe remained neutral throughout the conflict, and thus its territory was greatly preserved from the onslaught. But world economy was a mess. A new turn into far-right ideology engulfed european contries.

A new Nazi party rose to power in Germany, with a promise of founding the Fourth Reich, and bringing the nation back to its former glory. Soon, many other countries followed a similar path and extreme-right parties stablished dictatorships all over Europe, most of them puppet states of Germany, which was the greatest economy on Earth after the nuclear world war. In time, all Europe became virtually assimilated into the new nazi Empire.

These are the options for lore I'm currently working on. This is another advantage of having a universal ruleset. You can create armies of your own, create rules for them and play other fictional armies of existing fiction or of your own creation as well. Cool possibilities.

In the meantime, I'm also working on some British Line Infantry for my Napoleonics, and some Eisenkern models, which are going to represent basic infantry on my Space Nazi army.