Another Battle, Another Fleet

Since I didn't post a proper Battle Report of the latest game I played, but simply explained how the mechanics work on my ruleset, I thought I'd say something about the most recent hostilities between Klingon and Cardassian forces. 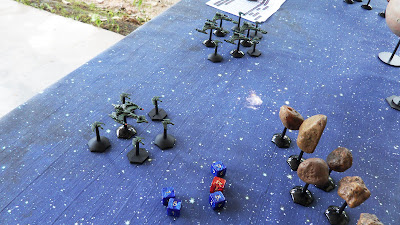 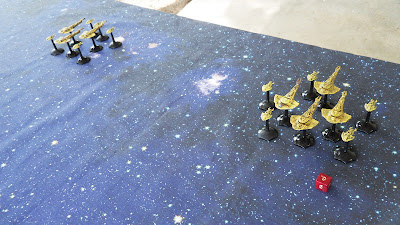 The Cardassians had 2 squadrons of Galors, one with 3 ships, the other with 4. Each was escorted by  a squadron of 5 Hidekis. 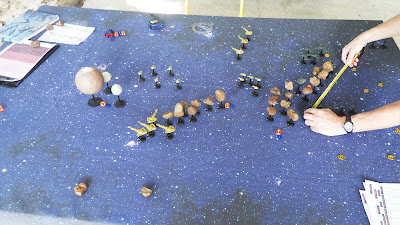 My adversary had better overall Spacefaring, so I had to deploy first. He then concentrated all his forces on his right side of the table - facing my own left flank.

As the game started, I quickly maneuvered that flank out of there, bringing it to the middle of the table, using an asteroid strip as cover while doing so.

My right flank made it full ahead trying to go around another asteroid strip before it would close in on the first cluster, as those terrain features were kind of converging, and there was the risk the passage between them would get closed soon. 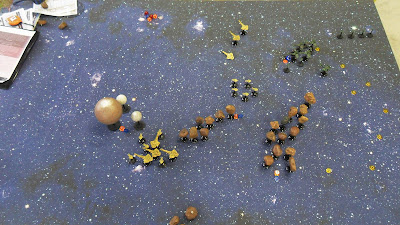 The Klingon paved their way with mines, so to keep me from chasing their rear. Luckly, the asteroid strips remained sufficiently apart so that my right flank could be brougth upon the enemy through the middle of the table. 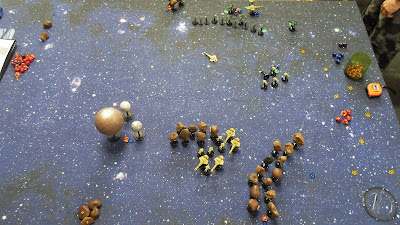 The Klingons kept a compact formation, and their concentrated fire power did away with the Cardassian Flagship. I recently changed the rules and now the destruction of the flagship doesn't force a morale check to leave the game. It now works simply as a modifier to the morale check for leaving the table if the fleet is under 50% initial hull points. 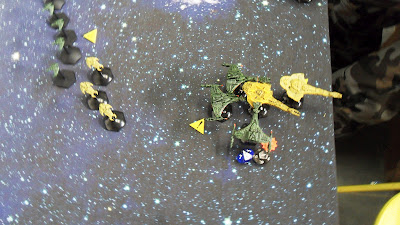 I managed to kill a Vor' Cha and cripple another, negating its capacity to fire, with the remains of the Flagship's Galor Squadron. Unfortunatelly for me, the 3 Klingon destroyers still on the game made a combined boarding action on one of my galors. It meant that I had 1 Cardassian Troops and 4 crew points to defend my ship against 5 Klingon Troops.

A little note here: On Pax Stellarum, players can customize troops abundantly. The Klingons, for example, I designed to have 3 nice traits that represent their in-show characteristics. They've also got better attack value than the cardassians.

For all that, it was pretty much a massacre against my galor, which was easily taken, earning the enemy double victory points.

I could attempt retaking it with the 2 troops I had on my other galor nearby, but the ocuppied galor had the 3 surviving Klingon Troops guarding it. On the other hand, no Klingons were guarding the Vor'Chas, so it was just a matter of invading and killing the crew - which is never a huge threat for troops, unless in very big numbers. 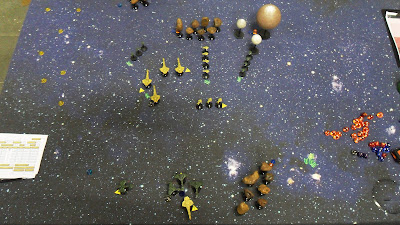 We couldn't play any longer, though, as my friend had to go by then. At that point, he had more victory points, so it could be claimed that the kilngons prevailed, alright...

Changing topics, my Narn fleet from Agents of Gaming arrived this week, and I've already put everything together. On the pic below, you can also see some Minbari reinforcements that came along.

Don't really know why I bought so many Minbari (and Vorlons!) in the first place. It's not likely I'll be able to field that many of these advanced ships at the same time in any single battle... 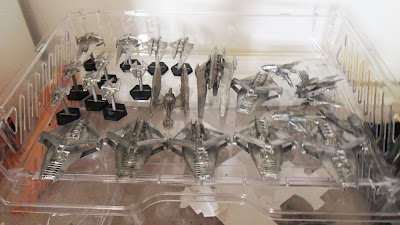 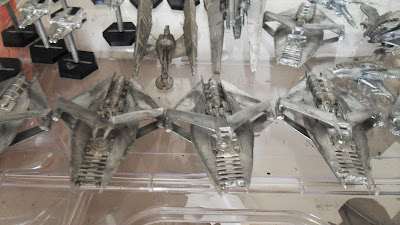 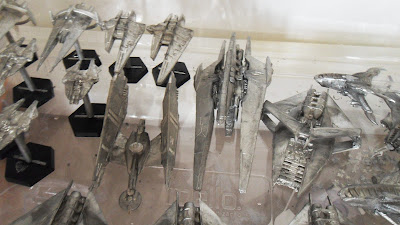 On the next couple weeks I'll be working on these ships while also trying to make the final adjustments on my ruleset. I believe I'm not far from finishing the later (!).