I'm glad to announce my ruleset is almost all ready. Some minor issues still need addressing, but overall, it's working fine. 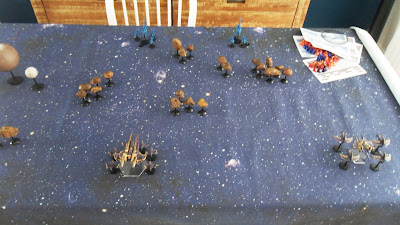 Pax Stellarum is not a simple system. It's not complex either. It's elaborated. By that I mean that there is a lot that can be done on it, and each possible action interacts with others, and so players are required to think a little ahead rather than just throwing a bunch of dice once it's their time to fire weapons.

I created rules to allow me to do almost anything I could imagine doing in a spaceship game. Rules cover from boarding to ramming, from deploying fighters to deploying mines, from bombarding planets to invading them with spaceborne troops, from bringing ships from reserve through hyperspace jump to leaving the battle due to failing a morale check, from moving through an asteroid field to destroying an entire planet with a single shot from a massive gun (Death Star Superlasers, anyone?)

Players can give Special Orders to their ships, that go much beyond the standard move forward/pivot and fire. They involve redirecting energy to move faster, or to turn sharper, to increase Shields endurance, to lower your signature, to perform an emergency jump into hyperspace, to force a battered enemy ship to surrender, and so on. All that with no book keeping.

The Rulebook have roughly 100 pages, divided in 2 chapters: Basic Rules and Advanced Rules. The Basic Rules have 50 pages, with loads of examples and pictutres to ilustrate the rules, that are written on a not much space-friendly font (Bankgothic Lt Bt, which I use cause it looks cool!).

All that aside, the basic rules could probably fit on 25 pages, not that much scaring. But playing only with the Basic Rules won't give you the actual feel of the game.

The Advanced Rules is what takes the game from 30% tactic/70% dice luck to 70% tactic/30% dice luck. There is where one can find all the possibilities I briefly meantioned above.

Knowing all the Advanced Rules is not required for playing, but not knowing too much of it is probably going to lead you to be outclassed by an adversary who knows, so there is definitely a learning curve here.

Anyway, it won't be long before I feel confident enough on the consolidated rules to share them for free, so that anyone interested may give it a try.

Now, enough of cheap chat, and lets see some fighting!

My latest playtesting game had 2 of my most cherished fleets clashing on the Babylon 5 Universe: The Minbari Federation and the Centauri Republic.

It was a 1850 point game, but I allowed both fleets to go over that limit a little. 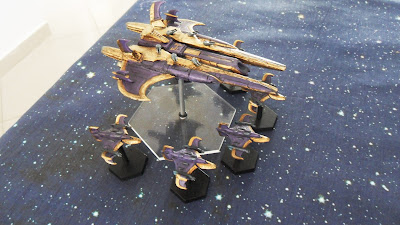 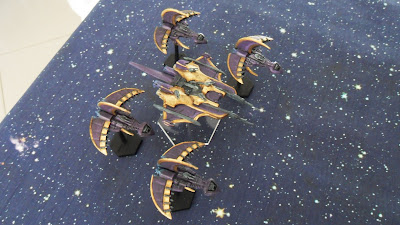 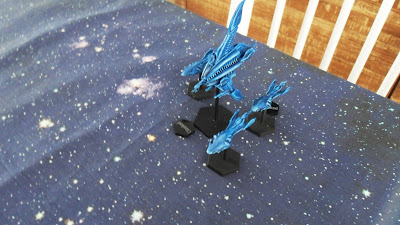 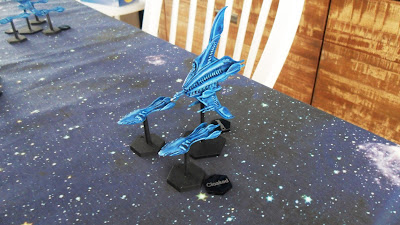 I got to the game willing to put at proof the myth about the Sharlins being undestructible. I gave them very high stats, trying to truthfully represent what we see in the Series, but had my hopes the Centauri fire power could play a trick on those legendary vessels. 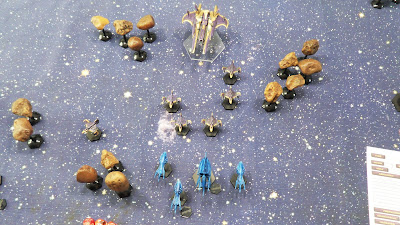 The game begins and the flagships head for each other, along with their caravans of escorts. 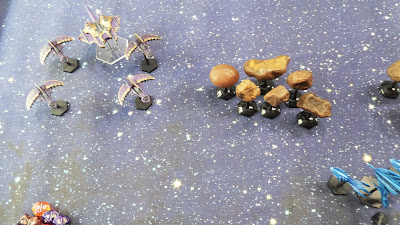 The Primus and the Vorchan Squadron made a turn to head for the other Sharlin, which was escorted by "only" 2 Torothas. 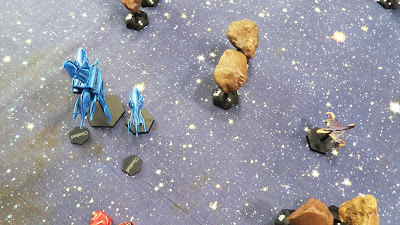 The Sharlin left flank was out of reach of the Primus and Vorchans' Sensors. Although they had high rating for that system, the Minbari had Stealth, which reduces their Signature considerabily, thus making them detectable only at close distance. The Centauri worked that out by sending 1 Haven to the proximities of the enemy.

The Havens have got the Scout ability, which enables them to share their Sensors findings with any other ship on their side of the battle. 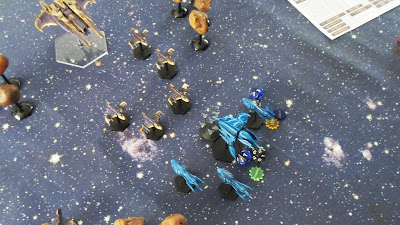 The Centauri left formation unleashed its tremendous fire power on the Sharlin and one of its escorts. The Torotha suffered 5 hull damage, out of a total of 8, and had criticals on its Shields, Life Support System and Port side weapons.

The Sharlin suffered 1 hull damage, and had its Shields dropped to 87.5% 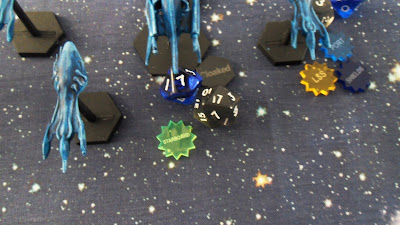 The Sharlin flagship getting a warm welcome from the Centauri Octurion. It can be damaged after all.

"If you could make God bleed, people would cease to believe in him, there will be blood in the water, the sharks will come."
Ivan Vanko, in Iron Man 2 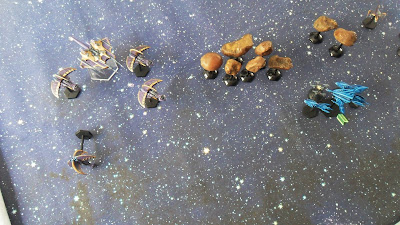 The Minbari payback doesn't take long. The other Sharlin destroys a Vorchan, and soon after another is doomed by the Torothas. 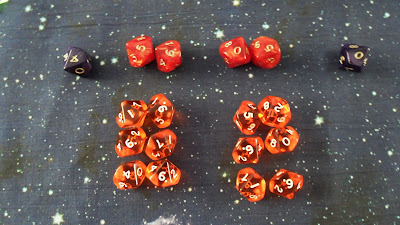 Big ships roll lots of dice for weapons' fire. Here is how I speed game play for this. Each color is a diferent weapon. Above, I've selected the dice for the firing of 2 Vorchans from the same squadron: Each is going to fire 2 Heavy Battle Lasers, 6 Twin Particle Cannons and 1 Missile Silo. 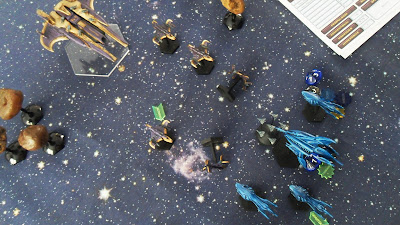 The Minbari flagship formation begins showing some service and opens a hole on the Haven lines. 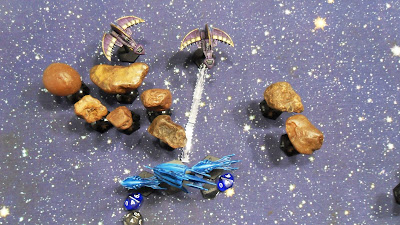 On the other side of the battle, the 2 remaining Vorchans were trying to go around an asteroid field and attack the Sharlin flank, but one of them got too close and was targeted by the Cruiser's Tractor beam. What started as a good firing position... 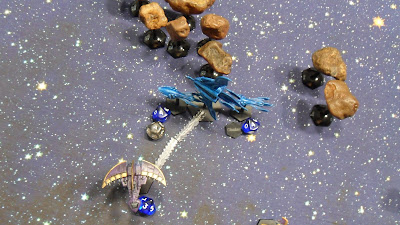 ... ended up as an unsettling situation, after the Minbari used its tractor power to move the enemy through the asteroid field to the other side of their formation. The Vorchan was now with its rear facing the enemy, and with its Shields reduced from 4 to 3D6 (75%), after sustaining several asteroid hits. 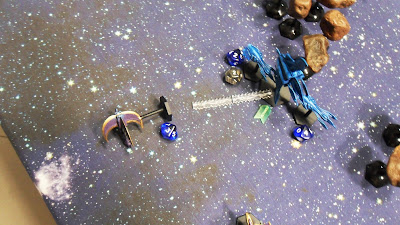 With the enemy "outmaneuvered", it was just a matter of finishing the job with proper broadside fire power. 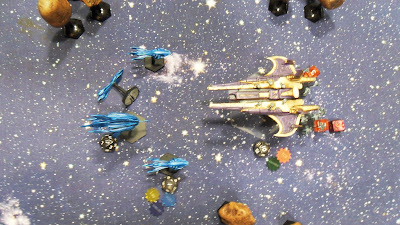 The flagships' confront rages on, as both sides choose to close in at low speed, thus allowing them more time to hit the enemy with their prow weapons.

The Havens were all gone by then, as well as 1 Torotha frigate. Another was crippled, with a critical hit on Life Support System, among others, and its crew was dying slowly, as it repeatedly failed to fix it. 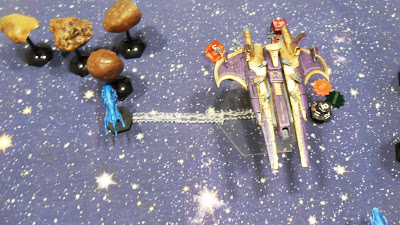 The Octurion uses the same tractor beam tactic with the single still sound Torotha escorting the Minbari capital ship. It targets the minbari and moves it to its right side, putting it in arc for its destructive broadside.

I thought of pushing the torotha all the way into the asteroid strip, in order to damage it a little or at least inflict some Shields' damage, but then I realised the Octurion broadside would have a hard time hiting the frigate among the asteroids, and so I choosed to stop it just there. 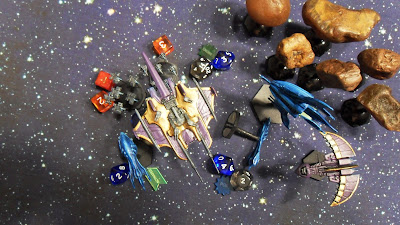 On the left side of the table, the Primus passes by the Minbari formation, taking the opportunity to use its own broadsides to fire at both Torothas, succeeding at destroying one. Meanwhile, the remaining Vorchan gets in position to fire at the enemy from the rear. 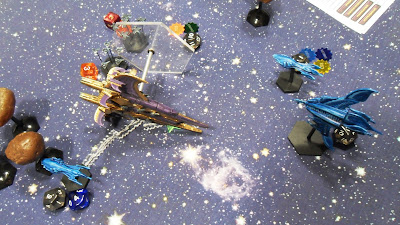 But the day was Minbari's. The Octurion fails at finishing the Torotha, and the Sharlin blows the enemy up with several Neutron Cannons' and Fusion lasers' shots. The battleship had its Shields totally down, and was unable to defend itself. 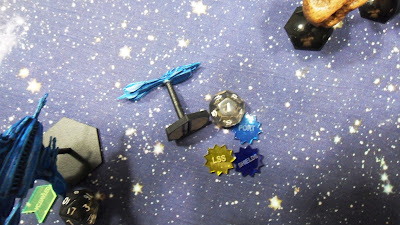 Soon after, the frigate with a Life Support System hit finally dies. We can assume crew either suffocated craving for air or managed to abandon the ship in time, through scape pods. 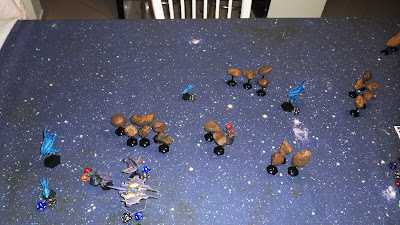 After that, the battle was over. The Centauri automatically failed a morale check, as it had its total fleet hull points dropped to under 50% and lost the Flagship as well. 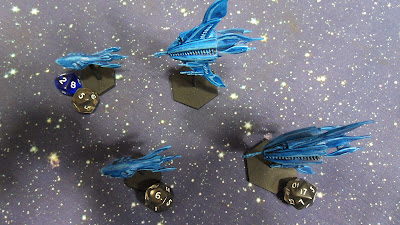 The remaining of the Minbari formation. 1 single hull damage to the Sharlins... 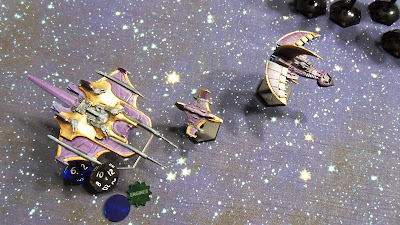 The Centauri that survived the engagement left the battle to fight another day.

My remarks about this latest game were dubious. On one side, the Sensors/Signature rules are working great, but a little adjustment is going to be needed to the to-hit values. The game only lasted 4 turns with the recent changes in range modifiers.

The rules are working fine for range modifiers, but need a little touch to make the game go back to 6-8 turns length. But I know where exactly to look for that, so I expect it to be working fine next time I play.

The fighters, on the other hand, are performing poorly with the new Shields' rules, and are going back to the drawing desk.

All in all, the game is likely to be all ready in a month or so.