Yesterday I played another battle: A 1900-point game with the Dindrenzi and the Star Empire. 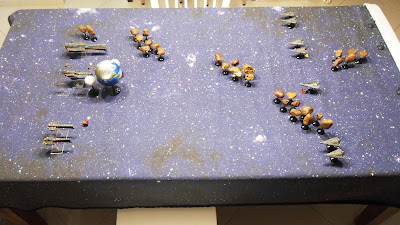 The Dindrenzi had a Conqueror Class Battleship, 2 Fury Class Cruisers and a Claymore Class Carrier escorted by 4 Buckler Class Corvettes.

The Empire had 7 Star Destroyers, with a handful of Tie squadrons onboard. 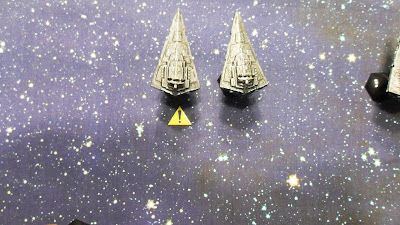 I used a token as a reminder of which Destroyer was the Flagship (one could say I really like tokens...) 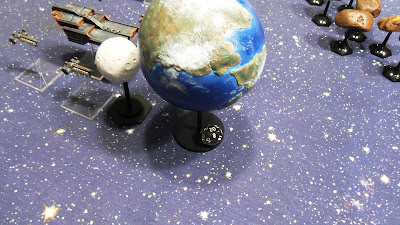 The Empire was attempting to reach a terran planet occupied by Dindrenzi troops (20, to be precise), and bomb the enemy, thus paving the road for a following invasion. 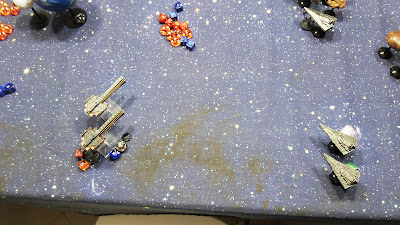 The game begins with both sides maneuvering to bear their broadsides to the enemy, as both fleets are stronger there than on their prow. 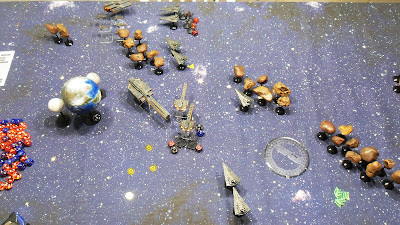 The initial exchange of fire damages a Fury, while the squadron moves away in order to deploy mines along its path. The Tie fighters, too small to trigger the explosives, are dispatched to try inflicting further damage to the cruiser with reduced Shields.

Note the Empire Flagship, on the middle of the table. I made the terrible mistake of placing the flagship in position to receive enemy fire from all sides... 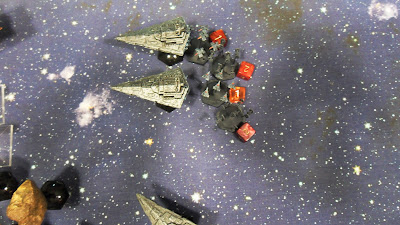 On the upper side of the table, the Dindrenzi Carrier started launching its complement, and more Tie squadrons had to be activated to intercept them and stop those from firing at the Star Destroyers. 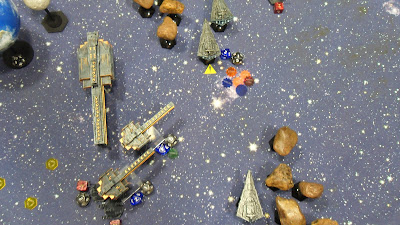 The Imperial Flagship is heavily damaged by the Battleship's broadsides and the Furys' prow torpedoes. 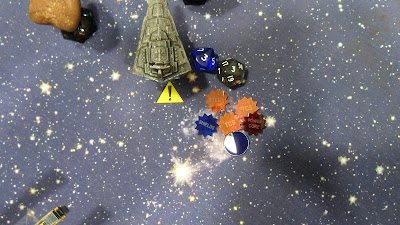 The Star Destroyer and its trail of tokens. It got Shields reduced to 50%, which then collapsed alltogether, with a critical; more criticals on Sensors, both Target Control Systems, Stern weapons and Power Core.  It was also reduced from 15 to 3 hull points. Now that's what I call a crippled ship... 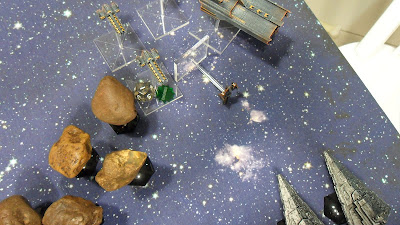 Another Star Destroyer squadron was doing away with the carrier's escorts. One destroyed and another damaged. Here is something we don't see everyday: a small ship with a critical hit. They usually die before having any, as they have so few hull points. 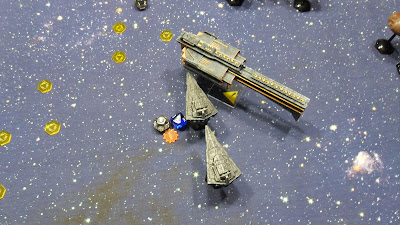 The battleship  reverts additional power to engines to move faster, thus crossing the mine field in a single turn's movement; after all, not even a battleship wants to be surrounded by mines in case they go off.

In consequence, it had less power available for weapons. A pitty, really, as it had an imperial squadron on the perfect spot for a full broadside fire. It even attempted locking tractor beam on the nearest enemy, to no avail. 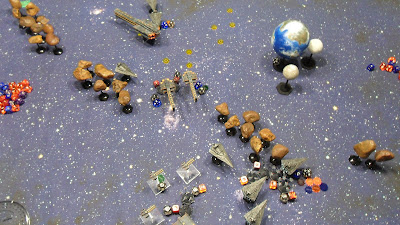 The mine field grows longer, as the Furys keep deploying mines while chasing the enemy flagship. By then, it was attempting to hide behind an asteroid strip, to survive longer and keep the fleet from having to roll a morale check.

The Dindrenzi bombers were chasing it like piranhas after a bleeding cow crossing the river. 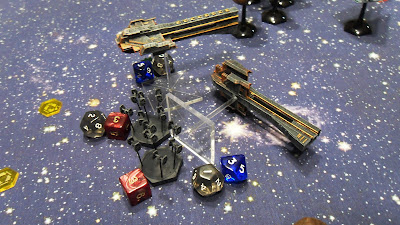 Meanwhile, the Ties finish a Fury. Too many Ties on your rear, and too low Shields to defend your hull is a nasty combination. 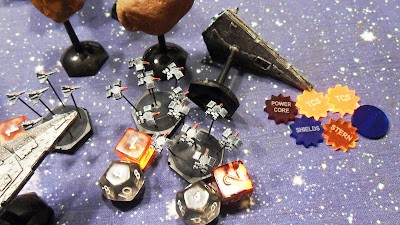 The Dindrenzi bombers retribute the favor most galantly: The imperial flagship is doomed shortly after. 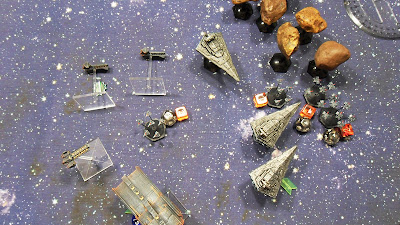 The Empire gets rid of a couple more enemy corvettes, and then chooses to head for the planet and start bombing it. 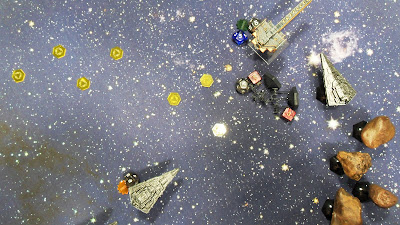 On the other side of the table, one Star Destroyer manages to avoid the minefield for just that much, but the other (on the center of the pic above) is brought by inertia within the mines' range, and the entire field goes off.

The Ships survive, but the Tie fighters that had just scored a kill on a Fury Cruiser are lost. 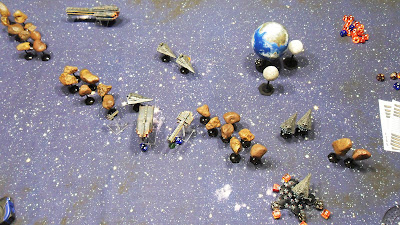 With the path now clean, more Star Destroyers approach the planet, and orbital bombardment starts. The Dindrenzi Battleship has now got a long way to go to be able to properly maneuver and bear its batteries at the enemy once again.

On the right corner, we can see an imperial ship surrounded by Dindrenzi bombers, which failed to inflict a single hull damage on it. Turned out fighters are effective only once ships start losing Shields. Until then, there is just so much they can do. 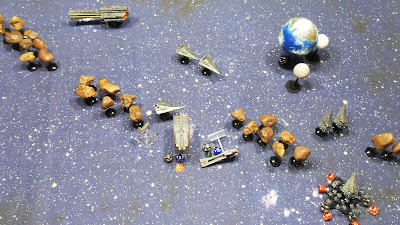 The game ends shortly after, due to the imperials failing the morale check for losing the flagship, but not before they finish the remaining enemy cruiser. Regardless of leaving the battle, the victory was theirs, once victory points were calculated.

My remarks; Fighters are working better, but I feel I still need to improve them a little. Other than that, the system is working smoothly.

The are still some buts, though. It took 3,5 hours to play 4 turns. Again, it ended with too few turns, and each took too long to play.

I'm already considering some changes to be done to address those issues. Minor things that I believe are going to make a big difference. The morale check, for instance, could be easier to pass, considering that the imperials were clearly on their game here. I'm going to add a modifier to work on these cases. That would make the game last more turns.

As for the length of each turn, the dierolls are probably going to need some tinkering to work faster.

More on that soon.