Playtesting on my ruleset for space battles - Pax Stellarum - continues, and the last game had the Empire of Men facing the forces of Chaos, both from Battlefleet Gothic game, which takes place in the Warhammer 40k universe. 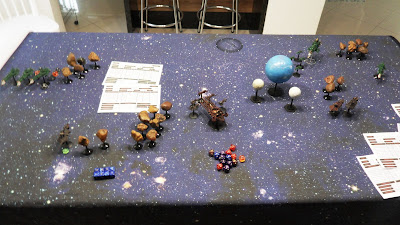 The Chaos forces had a Planet Killer, escorted by 5 Infidel frigates, a squadron of 2 Murder Cruisers and a  Devastation Cruiser with its complement of fighters.

The Imperials had an Emperor Class Battleship escorted by 4 Cobra Frigates, a squadron of 3 Overlord Cruisers and one Mars Battlecruiser, also with its complement of fighters.

I ended up doing something illegal, which I only noticed after finishing the game: I had 3 Imperial Cruisers forming a single squadron, while ships of that size could only form squadrons of 2 ships, actually. 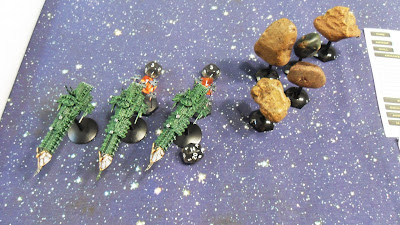 Because of that, the cruisers' squadron turned out extremelly powerful, and created a certain unbalance on the game. 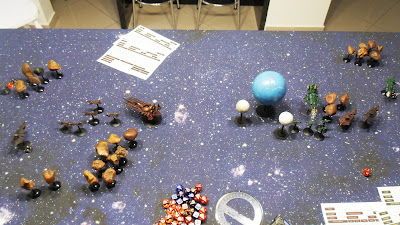 Anyway, the chaos forces concentrated on the Imperial Overlords, on the left flank (which don't show on the pic above; the are on the extreme left of the table). 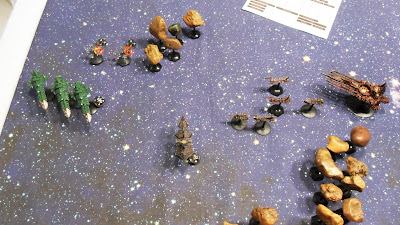 The Emperor Battleship then decided to chase the Killer from the rear, and began moving around the gas planet and its moons. Meanwhile, it took advantage of its position, with the enemy Murders on its broadside, and unleashed a barrage of fire on them. 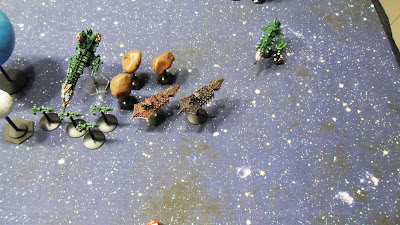 Luckly for the Chaos cruisers, only a small amount of the Emperor's fire made it through the asteroid strip and reached the chaos hulls.

The battleship's escorts also helped inflicting some damage to the enemy from the rear. But that was about it. From then on, the Mars Battlecruiser would have to deal with both Chaos cruisers on its own, as the imperial flagship was heading to rendezvous the mighty Planet Killer. 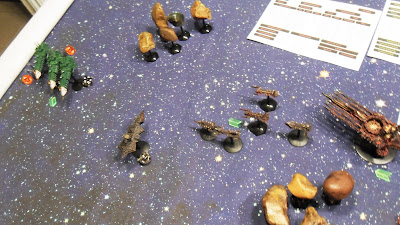 Speaking of the devil, it was trying hard to maneuver to get the Overlords Squadron within arc of its Armaggedon Gun. Meanwhile, those cruisers were inflicting crippling damage on the Devastation carrier, which got reduced from 16 to 2 hull points. 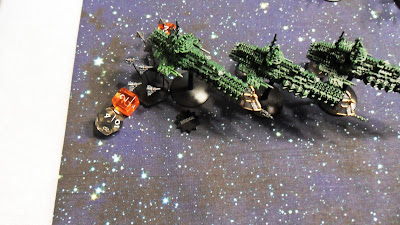 Fortunatelly enough for the Forces of Terror, the Swiftdeath Fighters inflicted a Critical Hit on one of the Imperials Bridge, through a precision attack.

Such hit would cause the ship to leave the game, through Hyperspace Jump, in short time, if it didn't manage to repair it quickly. This effect represents the crew going disorganised due to lack of command (after all, most of the high rank officers are probably dead from the blast on the bridge) and choosing to leave the battle.

Soon afterwards, though, the Overlords finished the Devastation, leaving the Chaos fighters with no base to return to. 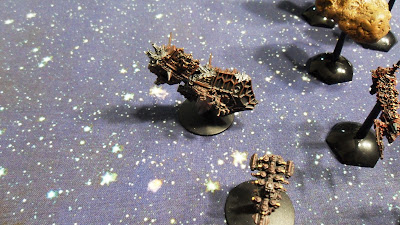 (The remains of the Devastation Cruiser) 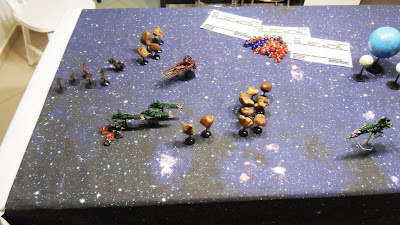 The Emperor kept heading for the Killer, while the Chaos flagship and its escorts were trying to handle the Overlords. These cruisers kept maneuvering to avoid the the Armaggedon Gun, but left their rear to the Infidels on the process. 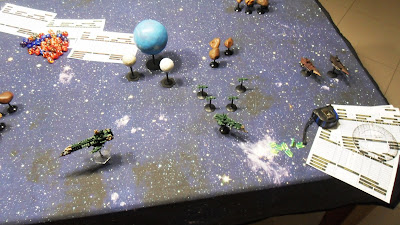 On the other edge of the table, the Emperor's escorts left the battleship to assist on chasing the Murders. Imperial and Chaos forces had just passed by each other, exchanging broadsides, and were now maneuvering for another round of hostilities.

Things were beginning to look bad for Abbadon Forces. The Overlords inflicted several critical hits on the Planet Killer, which was just too slow to get the enemy on the right spot for a shot of its main gun, and therefore had to rely solely on its not so powerful broadsides. 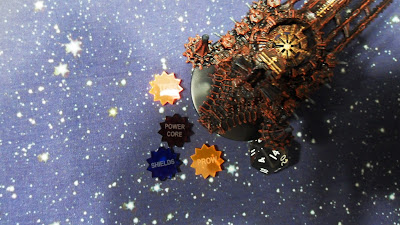 On the Chaos right flank, another cruiser fell for the Imperial fire power. 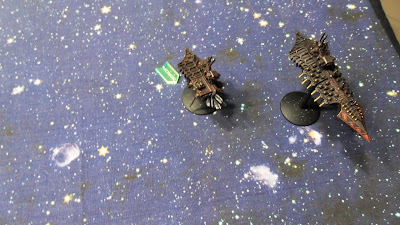 And yet more critical hits and hull damage to the Planet Killer... 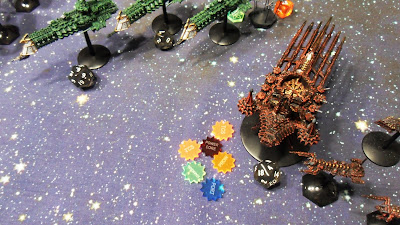 On the right flank, the Imperial Mars cruiser performs a failed boarding attempt on the enemy, losing all Imperial Guard troops on the process. It was a long shot anyway, the Chaos Cruisers had Chaos Space Marines, and the Imperial Guard was no match for them... 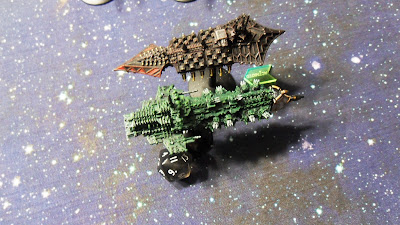 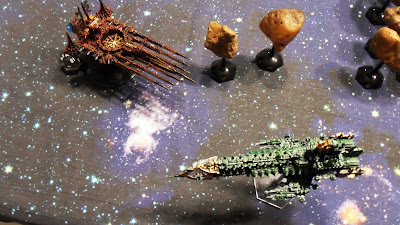 Things got worse for the bad guys when the Emperor finally got the Planet Killer on the perfect spot to attack it with full fire power, destroying the enemy - that by then was reduced from 27 to 2 hull points, and with criticals that negated its Prow, Port and Starboard Fire, as well as 2 destroyed Target Control Systems... 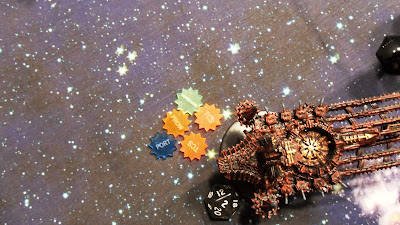 I decided to close the game by then, as it was already late night, and the Chaos forces were clearly defeated and any ships that would choose to remain in battle would probably get massacrated. 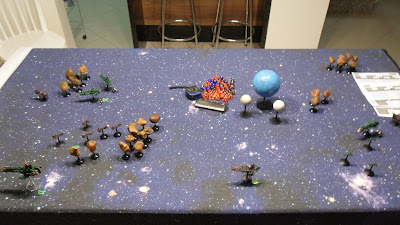 There were some obvious improvements to the rules, here. First, the game lasted for 7 turns, instead of the previous 3 or 4, and could have lasted more, as the Chaos forces were still passing their morale checks for total hull loss, and could keep fighting for a couple more turns.

I also got to test a number of advanced rules that make the game a lot more tactical, and that consists basically of power redirection options, either to make the ships move faster, turn sharper, defend better or become less detectable.

Next, I'll be testing the optional 3D rules.

By the way, in case anyone is interested, those tokens are custom made from Litko. Awesome stuff.